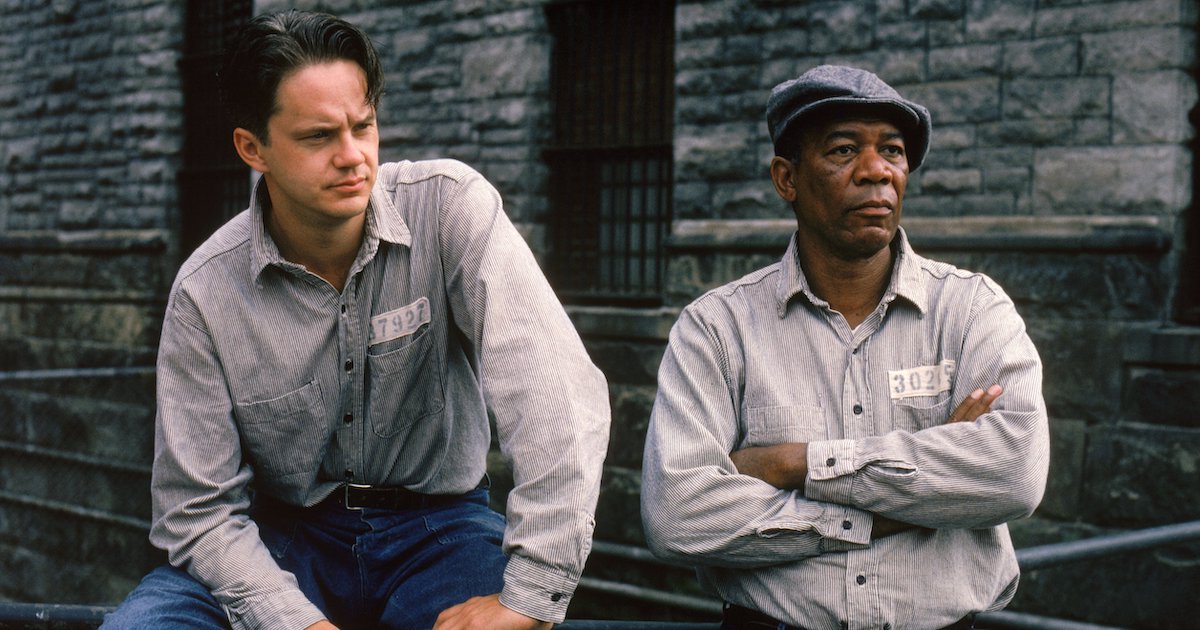 If you find yourself anywhere men are gathered together in an institutional setting, I can promise you this: somewhere close at hand is a copy of The Shawshank Redemption. (Most likely somewhere on a shelf between Band of Brothers and Goodfellas.) And I can also testify to this: wherever it is shown to such exclusively male audiences, there will be tears. For Shawshank is that rare thing: a movie that provides a space for men to cry.

If that sounds a little simplistic or patronizing, consider the fact that, upon its initial release, Frank Darabont’s adaptation of Stephen King’s short story Rita Hayworth and the Shawshank Redemption sank unceremoniously from view. I was still working as a movie journalist in those days, and participated in the movie’s Toronto International Film Festival’s premiere junket. I can tell you this for certain: nobody, not Darabont or cast members Tim Robbins, Morgan Freeman or the late James Whitmore, had any idea they were sitting on a stealth crowd pleaser and catalyst for pent-up masculine feelings. But then neither did I.

My reason for not expecting much of the movie had nothing to do with whether I liked it (I did) and everything to do with the fact it felt like such a deliberate throwback 40s “Big House” movie. No prison movie cliché was left unmolested by Shawshank, from the beleaguered and wrongly accused protagonist; the old lifer who provides wisdom and survival skills; the mess hall fight scene; the shower assault; the sadistic guards (‘screws, as they were called then); the meticulously plotted escape plan. Shawshank bore all of these movies (and more, like One Flew Over the Cuckoo’s Nest, Papillon, Birdman of Alcatraz, The Longest Yard, Brubaker, Bad Boys etc.) in its narrative structure and soul, with one minor significant revision. Even though just about every Big House movie was ultimately about redemption, Shawshank was the first to put the theme right up in the title. 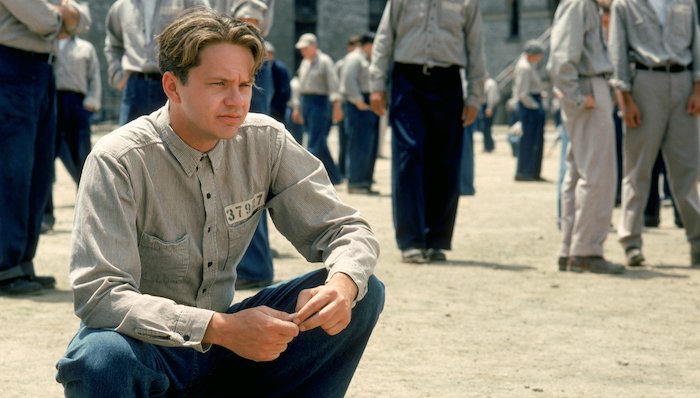 Redemption is what Andy Dufresne (Tim Robbins) ultimately acquires in Shawshank, and never for a moment does one suspect he won’t get it. But he has to deserve it, and this is where the movie sows its deepest emotional seeds. Like most Big House movies, the narrative is set up as a series of sustained assaults and humiliations faced by Andy, each of which increases the stakes of our investment in the man. (He doesn’t really talk much, so we take what we can get.) His ordeals are only made more intense by the fact we know the guy will ultimately get his, and the more brutal the ordeal the sweeter the ‘redemption’.

There are hardly any women in Shawshank, but that doesn’t stop it (or most Big House movies) from being a love story. Andy’s mentor, protector and spiritual master is Red (Morgan Freeman), at least until Andy proves his own resilience and the relationship between the two shifts: Red becomes Andy’s witness and chief disciple on the road to redemption. This too is something of a genre cliché, but Shawshank takes it to another level: the love between these guys is so strong and so pure (which the sexual threat of the ‘bull queens’ only fortifies) it rises above the ugly conditions on the ground and promises both vindication and faith. This may (and has) strike some viewers as sublimated homo-eroticism, and it is, but this too is a staple of the genre. And it’s neither sublimated nor consummated, at least not in conventional romantic terms. It deepens out of respect, shared experience and hope. A bromance behind bars.

It’s no revelation to note that this barely-concealed subtext is what drives Shawshank’s emotional engine. The shared faith between the two cons only deepens as ordeal piles upon ordeal, but it’s this faith that carries them through and eventually beyond the walls of the prison itself. Andy needs Red because of his experience and support, but Red needs Andy as a vicarious beacon of justice, hope and freedom. None of this is directly expressed of course. In men’s genres like the prison movie the bonds between men are forged by shared suffering and hope and not words. 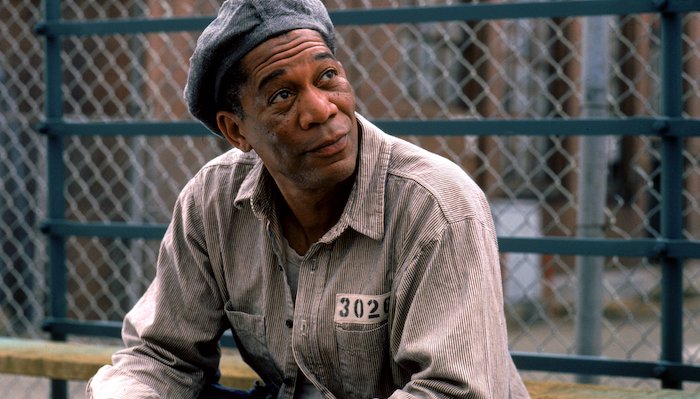 And that’s why Shawshank has proven so potent for so many (mostly) male viewers: it carries its emotional powers beneath the surface, boiling and simmering until that final moment when Andy reaches toward the storming sky like Jesus himself. But the rain isn’t the only waterworks at work: if your eye hasn’t moistened by that point in the movie, this shot is the one most likely to break the dam.

In western culture, men need both permission and context to cry. And traditionally this has been provided by shared experience: war, sport, politics. These are arenas in which the otherwise tightly stoppered male emotional mechanism is granted license to blow a gasket and let the rain fall where it may.

It would take some time for Shawshank to prove its power over its primarily male audience. A flop upon release, the movie only gathered momentum (and fans) on DVD, network screenings and word-of-mouth. Now it ranks as one of the most beloved and watched movies of its day. Ask almost any man who’s seen it, and most of those men have seen it more than once: Shawshank is a safe place for boys and men to cry.

Find the next playtimes for The Shawshank Redemption.