It’s a strange fact of the 70s that The Rocky Horror Picture Show, which would go on to be the movie with the longest theatrical run of all time, flopped twice when it was released. Even though the stage musical was a sensation, the movie failed to gain an audience on its first release in 1975 and didn’t even pick up steam when repackaged for college campuses with Brian De Palma’s Phantom of The Paradise. Thankfully the social and artistic upheaval of the decade swooped in and by 1976 Rocky Horror was a phenomenon.

The midnight movie craze started decades earlier on television, with new rules allowing the cheap distribution of B-movies (many science fiction and horror) to play repeatedly on channels throughout the U.S., pleasing both broadcasters and film companies. It didn’t take long after movie theatres began to charge per-film in the 70s until someone considered shifting the midnight movie concept to the big screen. Starting in New York, challenging and bizarre movies that didn’t have solid theatrical runs like Harold and Maude, Alejandro Jodorowsky’s El Topo and John Waters’ Pink Flamingos would play at midnight at a variety of theatres. Some of movies went on to play for months, drawing crowds thanks to word of mouth reviews about the wild things on screen. On April Fool’s Day 1976 the Waverly Theatre in New York played The Rocky Horror Picture Show for the first time and the word of mouth never stopped. 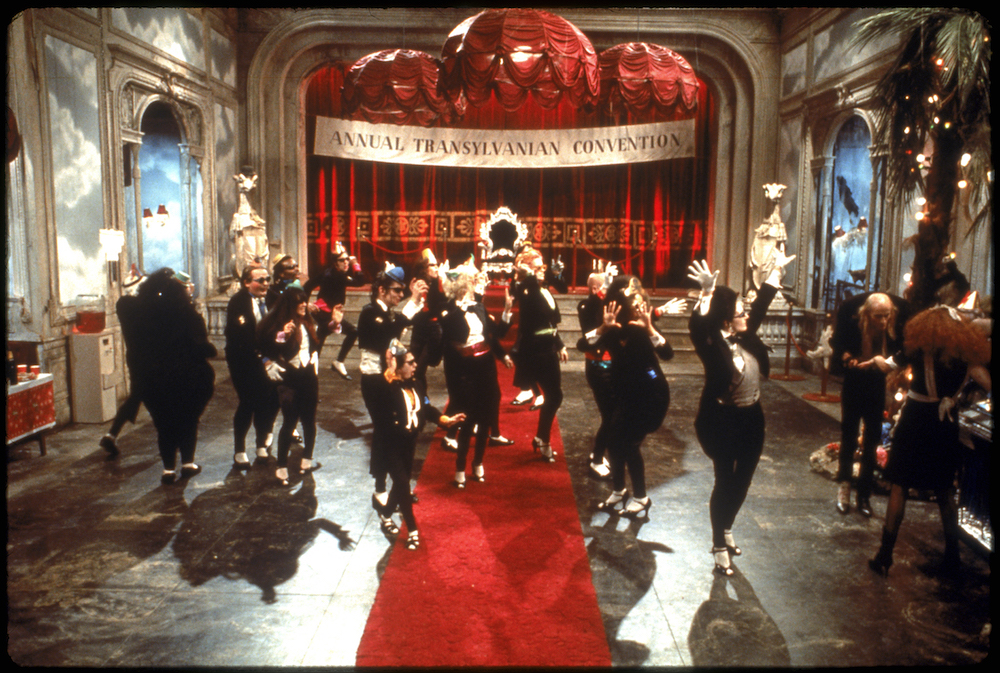 What set Rocky Horror apart from other midnight movies, and what made its phenomenon grow around the world, was written in the DNA of the movie. It took about five months at The Waverly Theatre before someone yelled out a joke at the screen, but after that it snowballed to create the Rocky Horror experience we know today. Props, costumes and actors performing along in a “Shadow Cast” all make a live screening of Rocky Horror a unique, audience-inclusive experience like no other film. But if you look closely at the movie itself you can see none of this is a fluke. 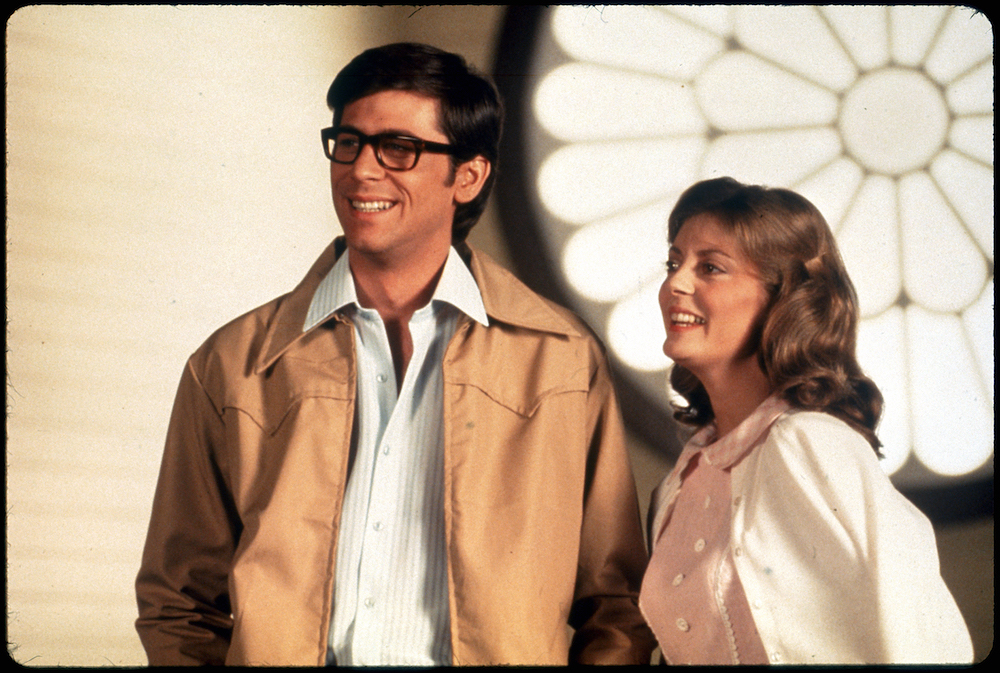 The post-war era saw a massive increase experimental theatre around the world, and by the 60s and 70s popular artists were shrugging off the traditional european theatrical conventions that dominated the stage. Two people who came out of this avant-garde wave were writer Richard O’Brien and  director Jim Sharman. Their first staging of The Rocky Horror Show stage musical relied heavily on experimental tactics by performing unconventional stagings, utilizing improvisation and interacting with the audience. The Rocky Horror Show in and of itself was a phenomenon on the stage as, much like Hair in the United States, it represented a wild and forward thinking script combined with a different way of presenting theatre to an audience.

It’s of course often impossible to drag the energy of live theatre on screen but you can see O’Brien and Sharman teasing with their bag of tricks and practically begging for the audience to participate. Barry Bostwick and Susan Sarandon, the Rocky Horror “virgins” of the film cast, are in multiple scenes where they are improvisationally tweaked, stepped on and scared witless by actions the director and other actors kept from them. The film also has an almost constant visible audience in the crowd of Transylvanians that the other characters cower from and play directly to which allows more theatricality. Beyond that, simply look at the way Tim Curry’s Dr. Frank N. Furter is shot: frequently handheld, staring directly into the camera and often breaking the fourth wall to address the cinematic audience themselves. It’s a wonder it took five months for audiences to start speaking back to the screen. 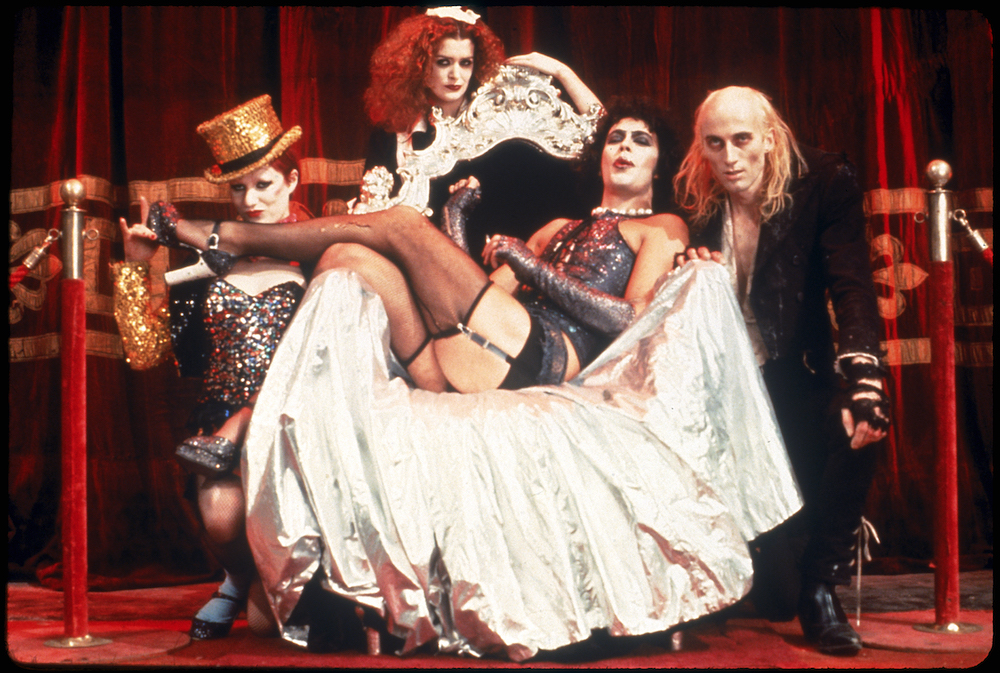 The echoing effect of The Rocky Horror Picture Show’s popularity may never be fully understood. Meatloaf, after securing a deal for his ‘Paradise by the Dashboard Light’ video to play before Rocky Horror as a trailer, went from a stage actor to a rocker who could sell out arenas. Many feel that the dyed hair, glam makeup and torn stockings involved in Sue Blane’s costumes and Pierre Laroche’s makeup design went on to inspire Punk and Goth fashion in the following decades. Tim Curry went on to a career full of iconic roles, and even claims to have even gotten Princess Diana to admit to Rocky Horror fandom. The crew behind the movie mostly returned to the world of the stage and experimental theatre but if you want a little more of their magic, the 1981 sequel Shock Treatment has that same crackling energy that made Rocky Horror a hit.