To Catch a Thief: Haute Hitchcock and 1950s glamourMar 08, 2018
Alma Reville: Recognizing The Contribution of Alfred Hitchcock's Wife and Collaborator in the #MeToo EraSep 20, 2018
Le Confessionnal: A Quebecois Film With a Hitchcockian TwistDec 14, 2016
Picnic at Hanging Rock: An enduring mysteryNov 16, 2017
Gaslight(ing): The Ingrid Bergman-starring Gothic Thriller that Coined the PhraseApr 13, 2018
Why Cujo is among Stephen King's favourite film adaptationsOct 17, 2017

Death From Above: The Birds, Alfred Hitchcock’s Avian Apocalypse

When Alfred Hitchcock opened the August 18, 1961 edition of the Santa Cruz Sentinel, he was delighted to spot this headline: “Seabird Invasion Hits Coastal Homes.” The story reported an almost unfathomably strange phenomenon that had occurred on the California coast. Seemingly out of nowhere, “millions” of migrating birds descended from the sky, smashing into cars and buildings, toppling TV antennas, and reportedly even trying to fly into homes. During the night, when people with lit flashlights opened their doors to see what was going on, they reported birds swooping toward the beams in an attempt to enter their homes. It went on all night. Then, as mysteriously as it had begun, the bird invasion ended.

One can only imagine the world’s most famous filmmaker’s delight. Six years previously, he had optioned the rights to Daphne du Maurier’s short story “The Birds” for his weekly hour-long anthology TV series. Du Maurier, author of Rebecca, the source of Hitchcock’s first Hollywood movie, told the tale of family living on the coast of England whose cottage suddenly fell under the attack of thousands of seabirds.

Hitchcock loved the idea, but only as a TV episode. One presumes that changed profoundly when he read that item in the Sentinel. Not only had the avian invasion actually taken place, it happened on a scale that verged on Biblical. An apocalypse. And so the movie that became The Birds began to take diabolical shape in his mind. This was way too big for TV. 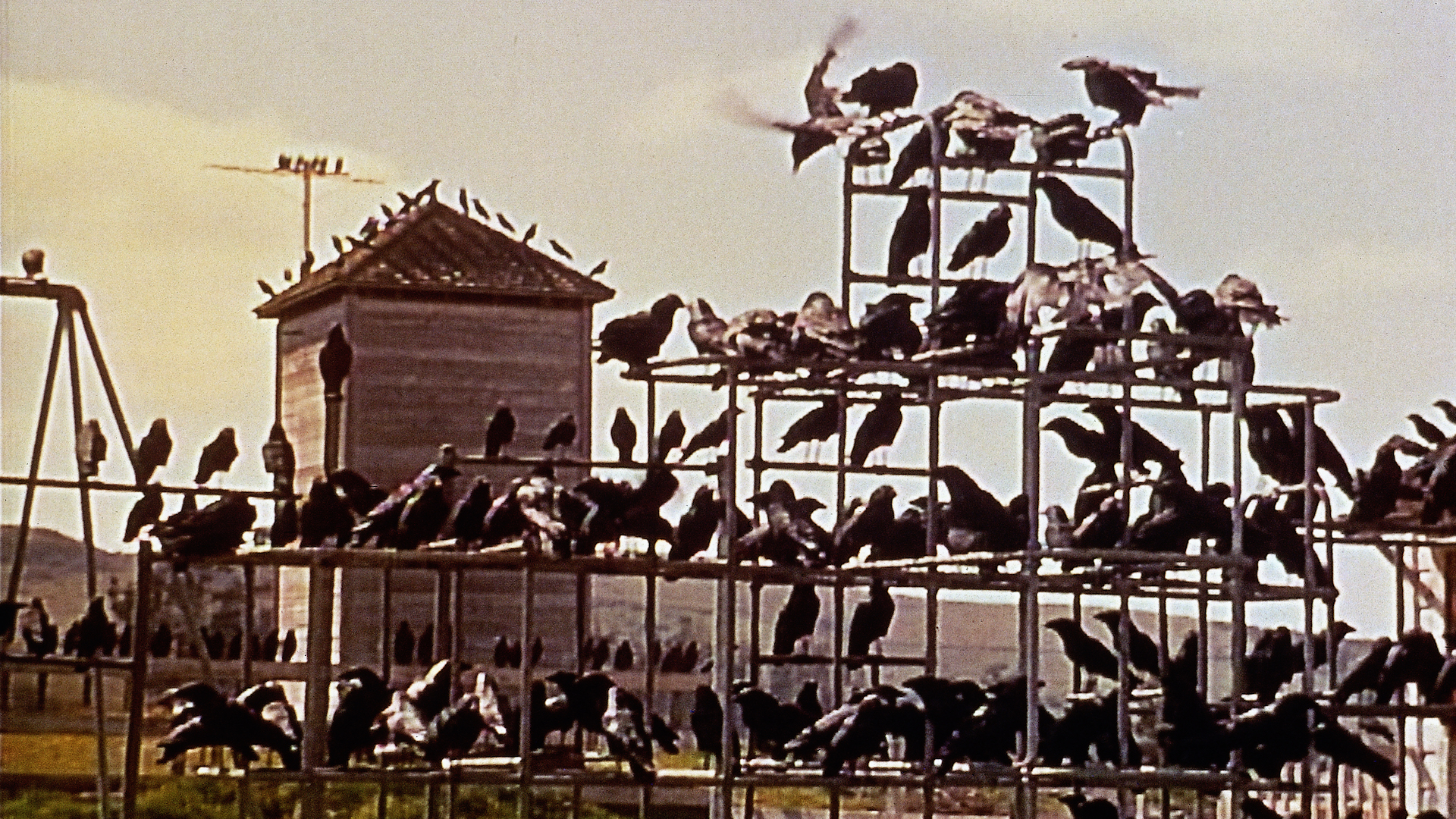 The California incident generated many theories about why the birds had suddenly seemed to attack the communities below, but ultimately no one really knew. Thus Hitchcock found his first brilliant departure from the du Maurier source. In the story, the birds’ attack is observed to be somehow associated with the shifting of the tides, and the besieged family eventually uses this knowledge to find safe haven.

But when Hitchcock got to work with screenwriter Evan Hunter (better known under his detective-fiction nom de plume Ed McBain), he insisted that the attacks that would terrorize the coastal California town of Bodega Bay never be explained. It seems a curious demand from a director famous for inserting fatuous explanations – like the psychiatrist who unpacks Norman Bates psychosis at the end of Psycho – of otherwise inexplicable events and characters, but in this case he understood just how much more frightening and unsettling the picture would be if it never gave us the why. And that’s what makes The Birds so fascinating and endlessly open to re-viewing and interpretation: without any scientific excuse for the terrifying events, they play like Mother Nature’s Judgement Day.

What Hitchcock also understood was that the re-conceived The Birds would be a monumental test of current movie-making technology. It wasn’t a matter of training birds to attack the cast on cue: not even the best bird-wranglers could guarantee that. In most cases, the birds would require optical effects. Blue-screen, then the standard method for overlaying images so that what wasn’t actually there seemed to be there, simply wasn’t good enough: blue-screen technology tended to generate a conspicuous blue fringe around the images inserted on top of the original image, and after a few tests Hitchcock gave it up: for some reason, the footage of the birds radiated a blue fringe so obvious the director knew it would never do. How can you frighten people if they know what they’re watching is a fake? So Hitchcock employed a new method called the sodium vapour process, a British-devised photochemical process that placing actors in pre-photographed backgrounds that all but eliminated the blue fringe. Walt Disney had used it to considerable effect previously, but it had never been tested to the extent that it would be in The Birds. 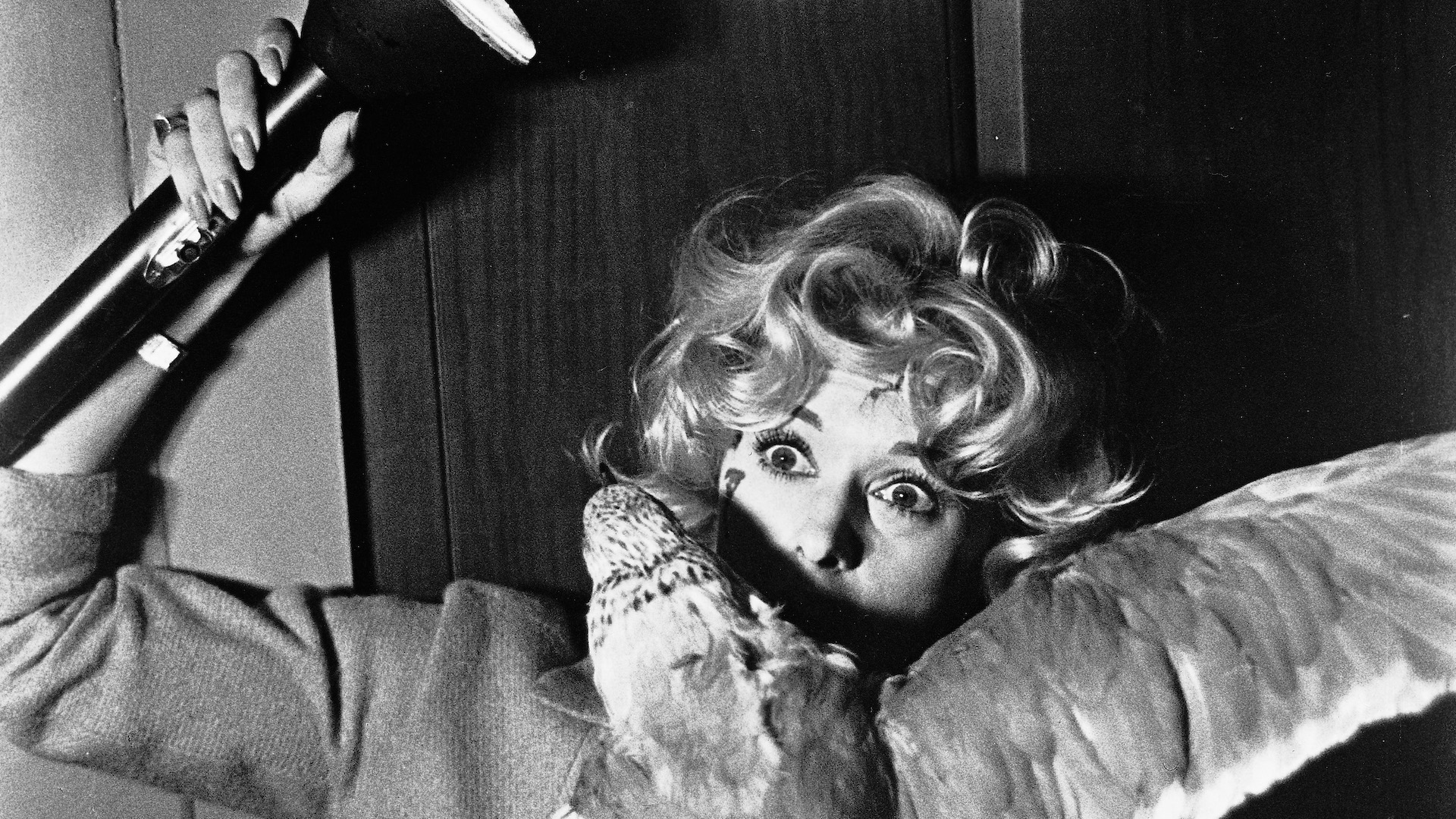 By just about all accounts, the making of the movie was something of an ordeal. Not only was the technical complexity of the images steep, the real birds used in the film – which, according to Hitchcock, numbered 3,200 – were notoriously unpredictable. They just wouldn’t follow directions. And they could be vicious. One of the movie’s more notorious production stories concerns the full week taken to film the scene in which Tippi Hedren’s character walks upstairs into an attic – “Why would I do this?”, she reportedly asked her director, to which he responded “Because I told you to” – and is instantly besieged by dozens of angry killer gulls. Gulls tied on strings – some to Hedren herself – proved to be so enthusiastic about the process Hedren was not only really cut by one of them, the ordeal of shooting the sequence shut production down for a week while Hedren was hospitalized from exhaustion.

Following an arduous post-production process, The Birds was finally released on March 29, 1963. It was an immediate hit, becoming one of the most successful movies released that year. And it has endured, despite the fact that contemporary, CGI-spoiled eyes may find its effects primitive and obvious. Nevertheless, the movie’s bravura set-pieces – the slow-burn schoolyard attack, the siege of the Brenner home, Hedren’s terrifying ordeal in the attic, the gulls’ descent on the gas station, and the chilling, end-of-the-world final shot – easily transcend their technical limitations. In no small part, this is attributable to Hitchcock’s sheer mastery – this would be his last truly great film – but more deeply and essentially, it is due to the film’s insistence on staying true to that item Hitchcock read in the Santa Cruz Sentinel: when the Judgement Day comes, no amount of explaining will matter. We’ll be too busy trying to survive.