Paranoia and Nightmare: Invasion of the Body Snatchers (1956)

Talk about fierce economy: in Don Siegel’s seminal parable of a conformist pandemic, Invasion of the Body Snatchers (1956), the world goes completely grey flannel in eighty minutes. While some of this can be chalked up to sheer B-movie efficiency, it’s also critical to the movie’s diabolical impression of unstoppable viral upheaval. As unnerving as the concept of the alien possession of human bodies might be, it’s the speed with which the small California town of Santa Mira is turned into ground zero for world domination that nudges a nifty science fiction concept into something closer to horror.

But maybe Santa Mira wasn’t a fluke. Could it be the invading extraterrestrial force picked this town precisely because it was ready to be flip-switched into Droneville with minimum fuss and resistance? Where the process of replicating people’s exterior shells after eliminating their inner cores was especially easy because the distinction was already an academic one? Where everybody was just a shell waiting to be husked anyway?

To its considerable credit, practical performance and enduring status as free-roaming metaphor, Siegel’s movie couldn’t be less interested in the particulars. Later versions of Jack Finney’s 1953 Colliers short story and subsequent pulp novel would linger over the details of who was doing the body snatching and why and how, but the original clarified its benchmark status by not caring less. The point was the vulnerability of a place this ordinary to the insinuation of forces that drew power from a latent human capacity for bovine passivity, and not the rustlers themselves. In later UFO lore, incidents involving livestock mutilation and cows airlifted from pastures would become a witness trope. One wonders if this too might count as one of Invasion’s lingering legacies: humanity as the livestock of the universe. Either way, in Santa Mira the cows came home first.

When handed the assignment to make the movie, Don Siegel had little experience in horror, science fiction or anything ungrounded in urban concrete. And he probably didn’t care, so along with screenwriter Daniel Mainwaring, screenwriter of the sublimely haunted Out of the Past, he approached Finney’s story of a small-town doctor Miles Bennell’s reckoning with the bizarre conformist epidemic breaking out around him, but which no one else even seems to see, as a coded extension of a nightmarish crime movie. One of those movies where the protagonist knows something sinister and horrible is going on but is powerless to stop it, where isolation is defined as a matter of existential uncertainty, where there’s no waking up from the nightmare. A film noir with aliens pulling the strings instead of mob bosses or corrupt cops, where the end-game of death has been replaced by something even more frightening: people you know re-potted as people you don’t. 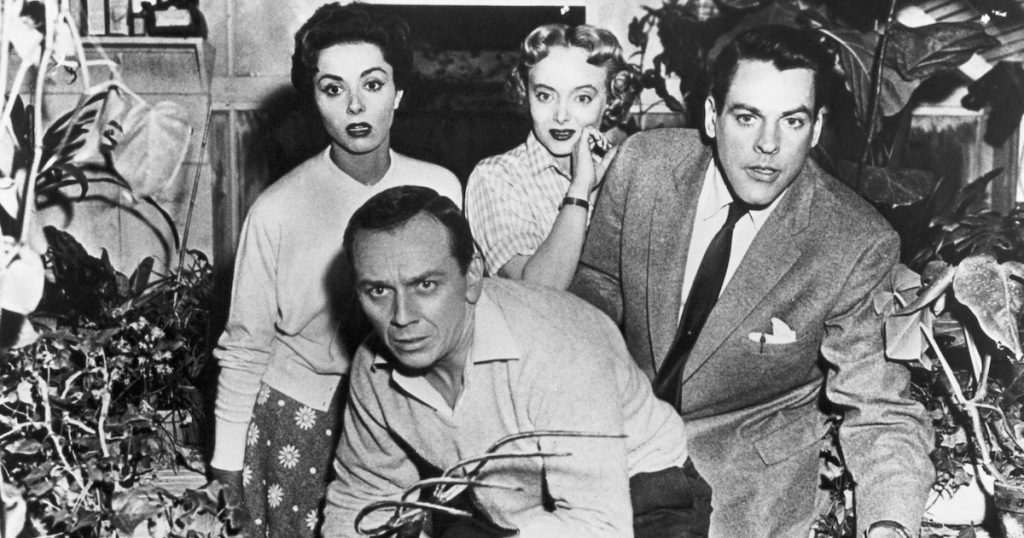 Fear of conformity configured as loss of soul was of course firmly installed as an inspirational concern in 50s movies and culture generally, so it wasn’t as if Siegel had to pull the anxiety out of thin air. Becoming one of the blank nobodies on the big commute was viewed as a multipurpose consequence of consumerism, communism, nuclear fear, TV and maybe even America’s true manifest destiny, and rugged individualism had begun to appear as something of an endangered life form. This loss of identity and autonomy was of course catnip for writers and directors of westerns and crime movies, who operated in generic landscapes engineered for marking struggles between heroic lone wolves and the forces that would fence them in. And this is what Siegel and Mainwaring would make of Finney’s novel: a movie where the ultimate fear is the futility of standing alone against the mob, because the mob has won and nobody cares about fighting back anymore.

In the interest of streamlining the locomotive and hastening toward the brink, Invasion begins with Dr. Bennell (Kevin McCarthy) being summoned home because there’s something strange happening in Santa Mira, some kind of outbreak of irrational insistence that familiar people have gone strange. The doctor sees it himself on the way from the station to his office: a boy he knows is hysterically convinced his mother isn’t his mother, and his delight at seeing his old high school flame Becky (Dana Wynter) back in town is only slightly dampened by the fact she’s returned to town because her cousin is insisting her Dad isn’t really Dad any more either. At the office, the doctor’s secretary confirms the apparent outbreak of dissociative incidents, but then notes most of the patients who wanted to see the doctor have now cancelled. Everything’s cool in Santa Mira.

Which means that, in less than ten minutes or so, and even despite the studio-imposed wraparound voiceover device that identifies the story as a safely contained narrative told by a surviving Dr. Bennell, Invasion has established normalcy as something creepy: it isn’t the odd behaviour of the allegedly bodysnatched that encourages the doctor’s anxious suspicions, it’s the sudden recovery of equilibrium after these momentary slips of reason. By the time he and Becky arrange for a belated high school sweetheart reunion because Miles isn’t going to be quite so busy in Santa Mira as he first expected, Dr. Bennell has become the town’s primary screw loose crackpot: everything looks fine to everybody except him. 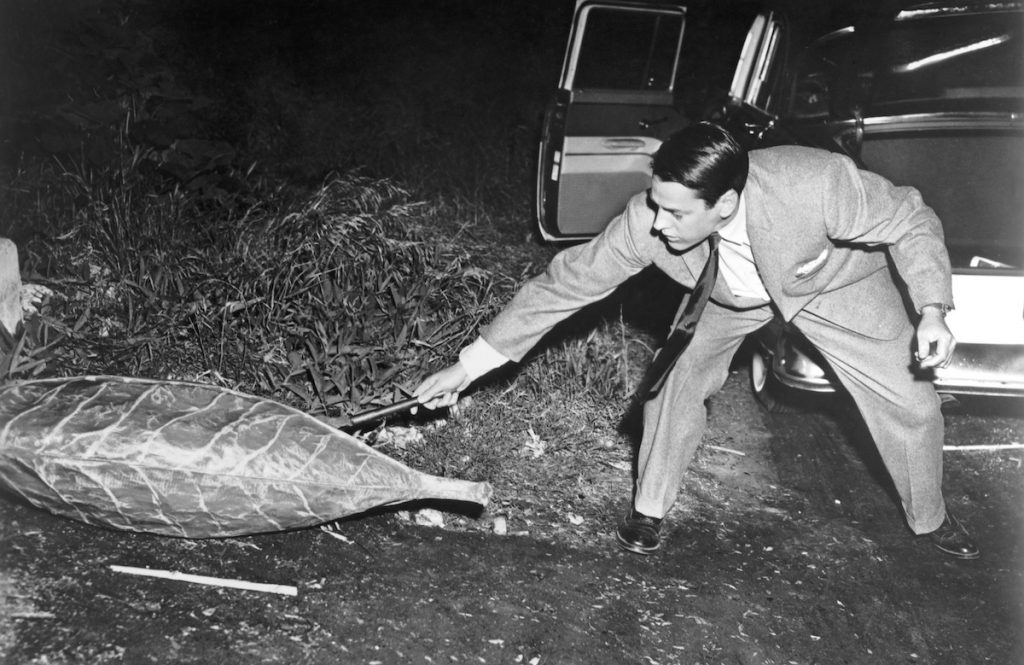 Becky is a quick convert of course: her endorsement of the crackpot theory is not only critically based in precisely the kind of irrational emotional affinity – love – the bodysnatched will soon scoff at as unnecessary and a reason for invasion in the first place, it will set the stage for the movie’s most potent moment of reckoning, when her kiss will tell Miles that she too has lost her soul to the pod folk. This is paranoia distilled and nightmare truly locked down: when Becky’s lips go cold and Miles realizes there’s nobody left but him. (And this is also why Allied Artists, the movie’s minor-league studio, insisted on that wraparound device: as antidote to the movie’s otherwise supersaturated game-over pessimism.)

Once Miles is provided credence by Becky (and his friends the Belicecs, played by Carolyn Jones and King Donovan), Invasion is fully cued up for its next big gearshift, which is the mad flight from a town now fully taken over by the alien presence and determined to plug any leaks in the local reservoir. The scene confirming the final stage is set in an office from which Miles and Becky observe the Saturday morning activities in the town square below. At first people appear to be going about their usual Saturday morning business, but that business becomes something else with the arrival of trucks carrying alien seed pods and the orderly dispatching of erstwhile Santa Mirians as dutiful seeders of the new world order. A knock on the office door provides only a breath’s exhalation of relief: it may be Jack Belicec and other ‘friends’ on the other side, but as soon as they step in it’s clear they’ve drunk deeply of the alien vegetable cocktail: “Love, desire, ambition, faith,” says the enragingly reasonable local shrink while prepping an ominous syringe. “Without them, life’s so simple, believe me.”

Miles and Becky bolt into a world now confirmed as both night and nightmare: Saturday morning seems to have evaporated into darkness, and the rest of the movie will play out in shadows, basements and dead-end corridors. The movie has fallen into full-on film noir nightmare free fall, and that final mortifying kiss will take place in the mud beneath an abandoned mine entrance where the footsteps of the invaders generate sharp stabs of light from above. In its original cut, Miles was to have scrambled on to a busy highway where no one would stop to help or listen to the crazy man in the middle of the road. After being spun by speeding traffic like a piece of litter, he’d turn to us and shout “You’re next!”, and there the movie would end. He still does that but the movie ends a minute or so later, after the initially skeptical professionals in the hospital — presided over by the exceedingly orderly Whit Bissell — are informed of something wicked being borne by trucks out of Santa Mira, and Miles’ veracity is finally confirmed.

This was to provide comfort in face of the foregoing intimations of utter and abject doom, and it apparently provided at least enough to find itself appended to the movie more or less permanently. (There was a re-release in the late 70s, right around the time of Philip Kaufman’s admirably effective 1978 re-make, from which the pro- and epilogues were excised, but were then restored.) But as studio-sanctioned compromises go, this one’s more forgivable than most, and strangely enough because it actually confirms just how deep into the mud the foregoing has taken us. I have never for a minute suspected this process was going to be stopped dead at Santa Mira’s city limits simply because Whit Bissell has called out “every law enforcement agency in the state.” Who’s to say Santa Mira was the only town where the pods landed? Who’s to say there aren’t trucks bearing pods all over the country? The continent? The world? And who’s to say Whit Bissell — as steady a fixture of grey-flannel Hollywood conformity as any — isn’t one of them already?

Find the next playtimes for Invasion of the Body Snatchers (1956) on Hollywood Suite. 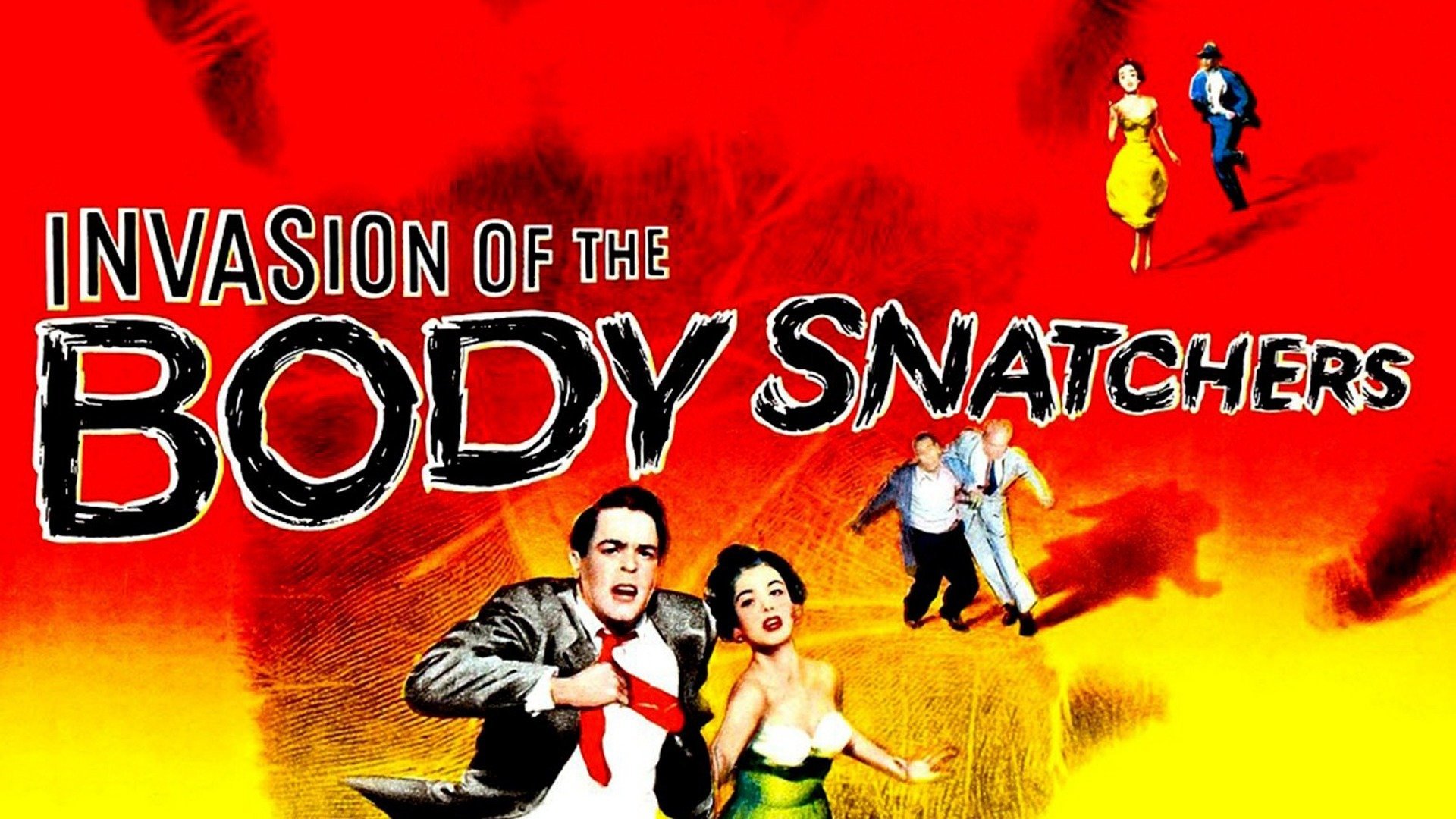