An unfortunate consequence of the critical success of Christopher Nolan’s The Dark Knight is how quickly it has erased Tim Burton’s 1989 Batman from the conversation among movie fans. There’s no denying the thrills of Nolan’s tightly-wound action movie, but there’s plenty of aspects of the Batman character (and moviemaking in general) it completely dodges that its predecessor revels in. As we wrap up Summer Film School, let’s take a look back at the biggest film of 1989, and why it still stands out among so many Batman movies.

One of the great pleasures of the movies, not surprisingly with Tim Burton at the helm, is its visual style. Burton had no interest in realism and builds a movie with the heightened feel of the Batman comics married with the style of classic adventure films like The Bat Whispers and The Mark of Zorro, which inspired Bob Kane to create the character in the first place. The style pulls everything from classic german expressionism (another inspiration for Kane), to the bombastic colours of the late 80s, to Burton’s own gothic sensibility. All this work is best represented in the film’s greatest visual interpretation, that of Gotham City itself by the great art director Anton Furst. 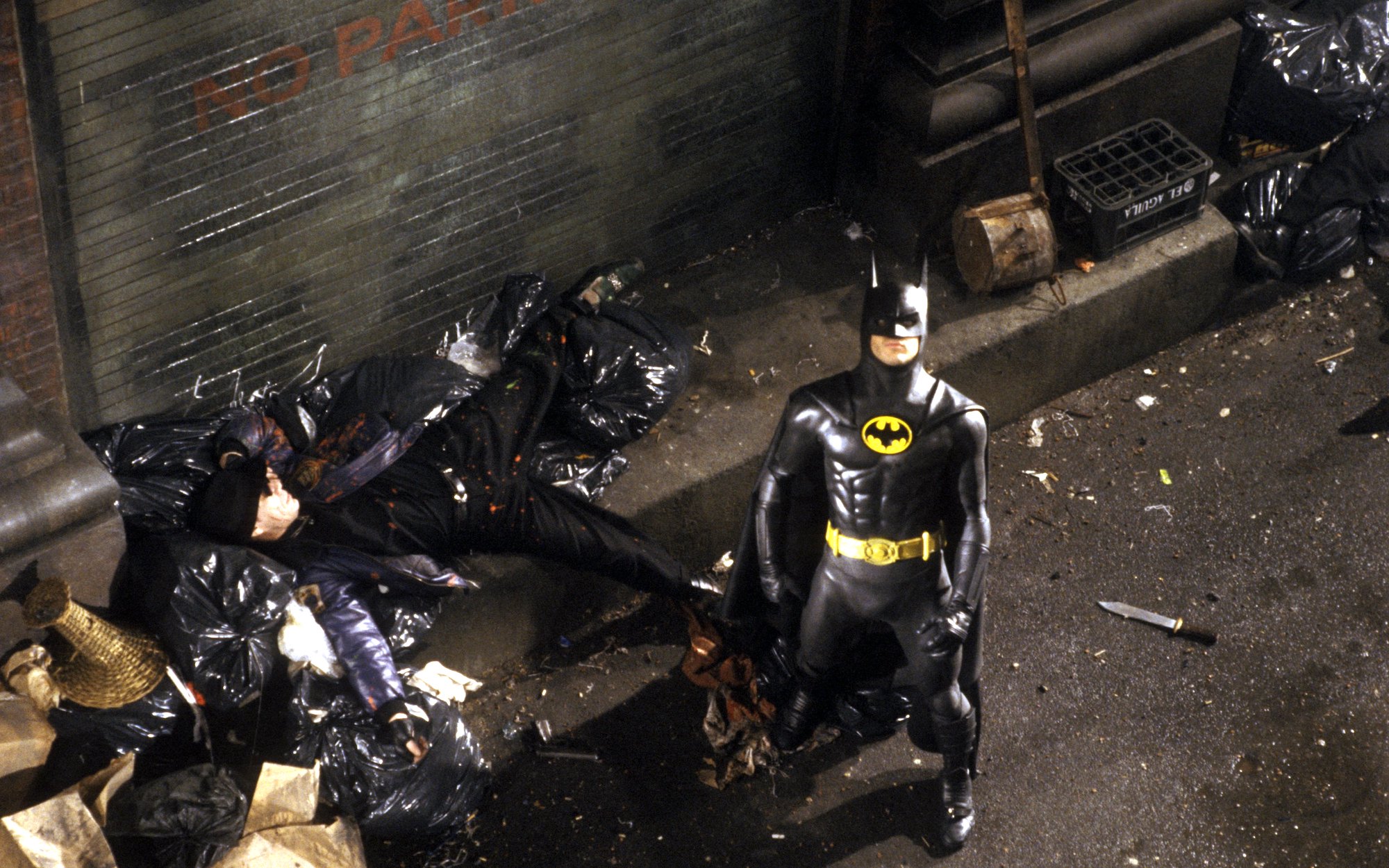 In Sam Hamm’s Batman script, Gotham is described as if “Hell erupted through the pavement and built a city.” A tall order, but Anton Furst was known for his ability to build the impossible – most famously, recreating US military bases and the Vietnamese jungle in England for Kubrick’s Full Metal Jacket. In Batman, his enormous $2 million set is a blend of industrialism and various architectural styles and eras, evoking both a massive scale and urban claustrophobia. Burton’s film focuses deeply on the psychology of the Joker and Batman, but the garbage-filled streets and chaotic designs of Furst’s Gotham raises the question of why two men would care so much about saving or destroying such a bizarre place.

Anton Furst would take his own life before he could ever grasp the impact his Oscar-winning designs had on Batman or the industry as a whole. The rest of the 90s Batman cycle, including the comics and cartoon series, stuck closely to his vision of Gotham, and the following waves of superhero films often set themselves in urban hellscapes and cities gone wild. Batman found a way to visually marry the fantastic elements of Superman with the grittier feel of recent Alan Moore and Frank Miller comics.

Another great joy in Batman is Jack Nicholson’s performance as The Joker. Often brushed off as a cash grab due to Nicholson’s famously bullish contract negotiations, which gave him a smaller initial cheque but part of the gross – and one of the biggest acting paydays of all time – it’s important to remember the film was still considered somewhat of a gamble. Also notable was the fact that while names like Brad Dourif, John Lithgow and David Bowie were floated for the role, the studio felt confident in Jack Nicholson, and he was really was excited to play the part. In fact, he reportedly bought the Joker’s whole wardrobe for $70,000. While his work is now often overshadowed by Heath Ledger’s Oscar-winning turn in the same role, Nicholson brings his own flavor to the character, finding an interesting medium between Ledger and Cesar Romero’s unhinged 1960s turn. 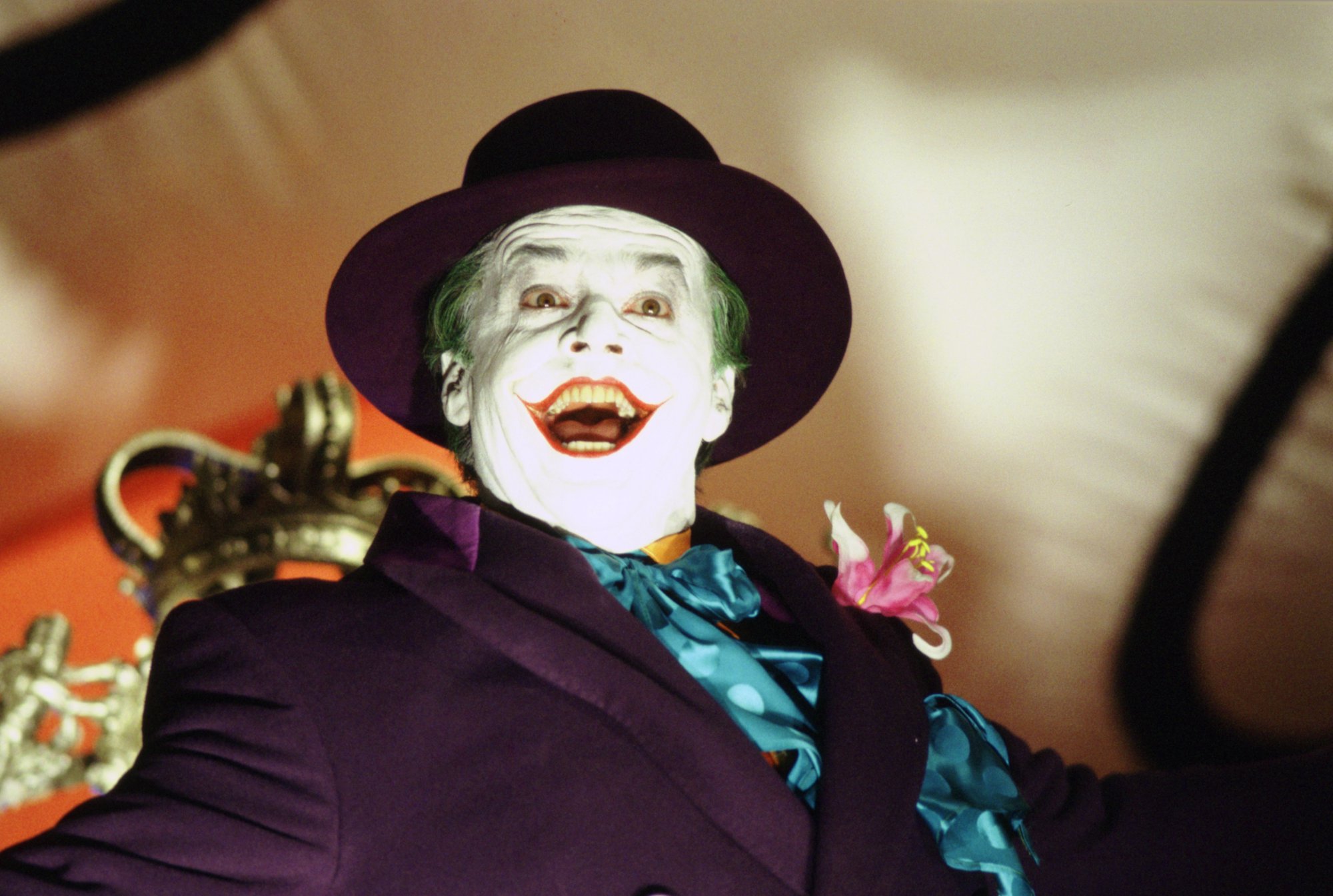 There are plenty of speeches in The Dark Knight about Ledger’s Joker being an agent of chaos, but while the performance is amazing, that concept is often betrayed by Nolan’s slick puzzlebox narrative. Tim Burton and Nicholson are more interested in the character’s psychology, and rather than a cypher, Nicholson’s Joker is the best filmed representation of that deadly, fearsome chaos the best Batman writers imbue the character with. Burton and Nicholson take time to introduce a vainglorious, psychotic gangster only to have him twisted into the character audiences already know. His plans to poison and destroy the city are darker than the character in most films, and his bizarre distraction by both Batman and his intended paramour Vicky Vale make for more broad and disturbing comedy. In fact, Nicholson brings plenty of humor to the role, perfectly suiting Burton’s ink black style, and having a lot of fun with the character. After a few weak decades of Nicholson performances, it’s easy to see him try, see him care and understand why this is a role he claims haunts him to this day.

Batman is far from a perfect film. It’s at times disjointed and messy, too experimental or too mainstream, but it feels like a marriage of artistic visions among the chaos. Rather than merely packaging a product or making something mainstream, each person working on the film wanted to dig deep into the Batman character, mythos and appeal to create something new. Whichever Batman may be your favourite, 1989’s is undeniably the start of a massive decades-long phenomenon, and makes bold and exciting cinematic choices that deserve to be remembered, not only among other films in the franchise, but among other classic movies.