The Company of Wolves: A Fairytale that Bites

“My, what big teeth you have,” remarks a young girl lured into a trap by a dashing, aristocratic nobleman. His retort is unsurprising, as she braces herself for a life-altering embrace. A film dedicated to adolescent sexual awakenings and the resultant loss of innocence, Neil Jordan’s The Company of Wolves is a mesmerizing, sumptuous, and erotic fairy tale horror that examines the grisly imaginings of the timeless stories we were collectively raised on. It accurately exploits the darkest of sexual metaphors found in the Brothers Grimm or the medieval fantasies of Sleeping Beauty author Charles Perrault. As a fantasy-based horror film released in 1984, The Company of Wolves, with its masterful production design and ground-breaking special effects, influenced macabre masters the likes of Tim Burton, Guillermo del Toro, and Terry Gilliam. As such, it is a pivotal work within the genre – one that begs to be experienced over and over, like a favourite bedtime story.

Based on Angela Carter’s 1979 horror anthology “The Bloody Chamber,” The Company of Wolves was the sophomore film from Irish director Neil Jordan – whose future credits would include the critically acclaimed The Crying Game (1992) and the highly influential cult classic Interview with a Vampire (1994). After cutting his teeth (or fangs, depending on how you look at it) on 1982’s Angel – a British crime thriller starring career collaborator Stephen Rea – Jordan wanted to turn his attention to fantasy-based allegory. Utilizing one of Carter’s original stories, a distinct modernized take on Charles Perrault’s “Le Petit Chaperon Rouge” (better known as “Little Red Riding Hood”), Jordan enlisted the author as his co-writer and adapted her tale for the big screen. What could be achieved so freely in narrative prose – descriptions of bloody and horrendous transforming creatures – had to be captured using advanced, practical special effects, which greatly influenced the screenplay. Werewolf films were somewhat in vogue in the 1980s – The Company of Wolves followed on the heels of Joe Dante’s The Howling of 1981 and John Landis’s An American Werewolf in London of the same year. But where those previous films relied strongly on comedy to evoke the outlandishness of the werewolf myth, The Company of Wolves unpacks the symbolism behind such well-trodden fantasies with a Freudian lens. A cautionary tale of sorts, it warns young girls to be “wary of charming strangers.” 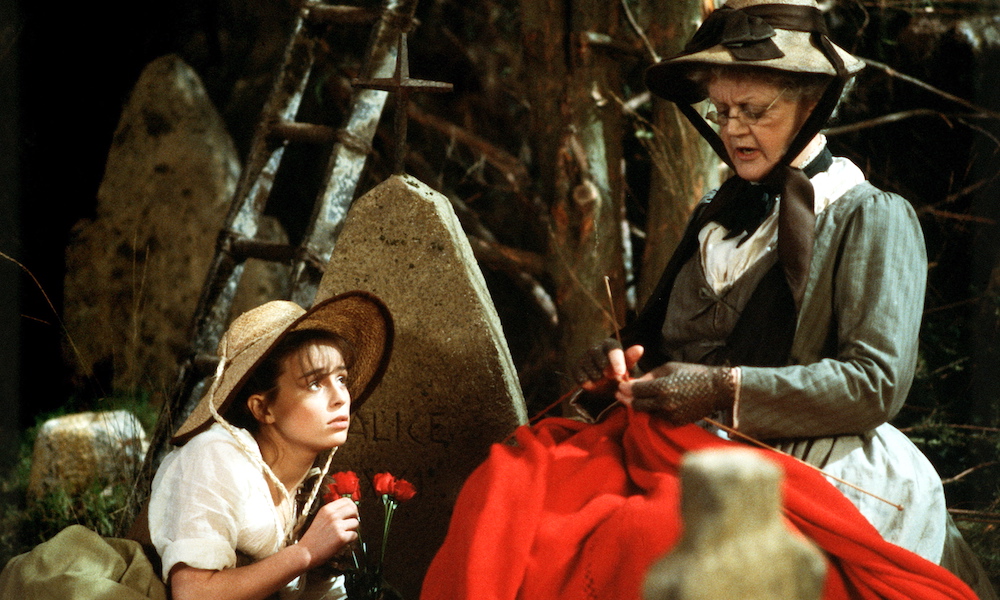 The Company of Wolves is comprised of three tales, structured as the dreams of a young girl named Rosaleen (Sarah Patterson). From the apparent safety of her 1980s-preteen bedroom, she dreams she is living in fairy tale forest of the late 18th century, and that a ferocious wolf has killed her older sister (a dream surrogate for her cruel older teenage sibling). With her parents in mourning, Rosaleen stays with her grandmother – played to unnerving perfection by Angela Lansbury. While there, her grandmother tells her a tale of an unsuspecting new bride married to a man “whose eyebrows meet” – a euphuism for a werewolf. Her second tale to Rosaleen involves the Devil incarnate (Terrence Stamp) who, looking for souls to entrap, is chauffeured through the forest in an anachronistic Rolls Royce. The film’s third tale is told by Rosaleen to her mother (Tusse Silberg) and is perhaps the film’s most iconic in terms of imagery. A woman is impregnated by a powerful lord and abandoned. Appearing at the lord’s wedding banquet, the woman reveals herself to be a witch and, in the film’s most revered special effects sequence, transforms the wedding party of aristocratic noblemen and ladies into a pack of wolves. After having contemplated the variety of tales, Rosaleen is confronted by a charming, yet sexually threatening gentleman (Micha Bergese) who challenges her to a race to granny’s house. Should he win, Rosaleen must promise him a kiss. Unfortunate consequences ensue.

Tales within tales, within dreams (both real and imagined) lend the film a surreal quality, as does much of its production design, spearheaded by Anton Furst. Furst would draw heavily upon both the dreamscapes of Salvador Dalí’s painting, as well as the Gothic engraving of French nineteenth-century illustrator Gustave Doré. Filmed in the United Kingdom at the famed Shepperton Studios (in Surrey), the set of The Company of Wolves was decked out to fairy-tale perfection, with dark, enchanted Bavarian forests. Never meant to look realistic, but rather designed to evoke a haunting world of magic and mystery, it anticipated much of the production design of Jim Henson’s Labyrinth (1986), as well as Terry Gilliam’s The Imaginarium of Dr. Parnassus (2009), and of course his fairy tale opus The Brothers Grimm (2005). Furst’s work on The Company of Wolves garnered him profound acclaim, with many critics attributing his masterful production design to the film’s success. Having discovered his work on the film, he was hired by Stanley Kubrick to build a realistic Vietnam War set on a UK soundstage for Full Metal Jacket (1987). Furst then took a role with Tim Burton on his 1989 mega-production of Batman. Having designed Gotham City – one of cinema history’s most iconic fictional cities and the greatest source of inspiration for future Burton works – you would think Furst would be a household name. Tragically, he took his own life in 1991, putting an untimely end to a monumental, albeit brief career. 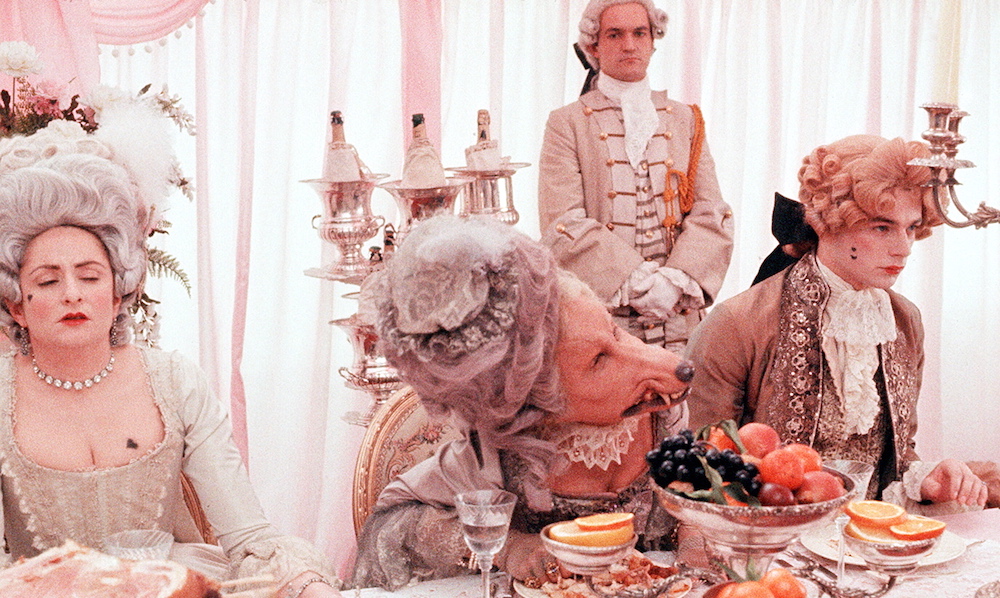 Casting The Company of Wolves proved tricky for Jordan in some cases, and fated in others. For the first tale’s werewolf husband, the director selected Stephen Rea, who had starred in his debut feature and would go on to appear in almost every subsequent Jordan production. For the granny, Jordan didn’t have to audition anyone – having watched John Frankenheimer’s The Manchurian Candidate (1962), he knew Angela Lansbury was his only choice. Her witchy, sinister role as a diabolical mother of an aspiring politician inspired Jordan. For the huntsman, Rosaleen’s suitor and granny’s perpetrator, Jordan looked no further than his choreographer, German-born Micha Bergese, who made his acting debut in The Company of Wolves and would go on to feature as a vampire in Jordan’s Interview with a Vampire. For the devil, Jordan initially wanted Andy Warhol, who was surprisingly eager to portray the role – his fear of flying however made travelling to the UK set an impossibility and Jordan cast veteran actor Terence Stamp, who is uncredited in the film. Perhaps the most difficult aspect of the film to perfect was its wolves. The production utilized two real wolves (for close-ups shots) and relied on Belgian Shepherd Dogs dyed to resemble wolves for all other shots – this was a safety measure, but even then, the production wasn’t without its risks. When filming the real wolves with young Sarah Paterson’s character, snipers were in the ready should they attack her (not only did the wolves not attack, they were terrified of a duck and continually ran away while filming).

When it came to casting Rosaleen, however, the character’s youth posed a problem, as the role was substantially sexualized. 12-year-old Sarah Paterson’s audition wowed Jordan and producers and they took the risk, altering Carter’s screenplay to appear less audaciously erotic. Paterson’s performance is remarkable – mature, and keenly aware of the terrifying hazards posed by “charming strangers.” She is both relatable in her adolescent naïveté and exceptionally powerful in her portrayal of a young girl on the verge of a sexual awakening. A rare instance within 1980s horror, Rosaleen is a figure of female empowerment, a carryover from Carter’s original stories. She questions the concept of a damsel in distress. She refuses aspects of her gender role, and in the film’s finale, she cunningly tames the fiercest wolf – albeit with a catch. The Company of Wolves, more than thirty years after its initial release, stands as a progressive, entertaining, and profoundly scary fantasy urtext. And like any good fairy tale, it haunts you with its dive into the primal and deeply-rooted fears we hold universal.