The Longest Yard: Burt Reynolds' end run from Johnny Carson's couch to King of the World

Watching Burt Reynolds in the first five minutes of The Longest Yard is as good a time capsule of politically incorrect, stale-dated machismo as you could ask for. But that’s only one reason it’s riveting.

Playing the disgraced former football star Paul Crewe, Reynolds first appears in full, fuzzy-chested repose as a woman – Anitra Ford – tries to rouse the reluctantly sleepy stud for another performance she has presumably paid for. But Crewe, who just seems anxious to get on his brown and white suede-and-velour suit and get outta there, not only resists her advances but summarily flips her off of him and onto the floor. Moments later, just before he steals her posh car and runs it off a wharf to watch it sink, he grabs her by the face and pushes her fiercely up against a wall. He’s had enough of her withering accusations of just how useless and washed up he is. And she’s had enough of his fuzzy-chested caveman bullshit, so she calls the cops and Crewe is sent to prison. And there, my friends, is where The Longest Yard really begins.

If I linger on the over-the-top misogyny of Crewe’s entry into this movie – the movie that would indisputably confirm Reynolds’ status as one of the most popular movie stars in the world for the next decade – it’s because the sequence tells us a lot both about why Burt Reynolds was so untouchably famous by the time of the movie’s premiere in August, 1974, but also just how warped the ideas of acceptable and idealized hetero-masculine behavior were in the simmering post-countercultural pop-cultural soup by 1974. (It might interest you to know that the movie, which pits the former Florida State All Star Southern Conference halfback in a memorably rousing but brutal semi-pro showdown against a Warden Eddie Albert’s team of take-no-prisoners guards, arrived just a couple of weeks after Richard Nixon vacated the White House and took the last shreds of his integrity with him.) 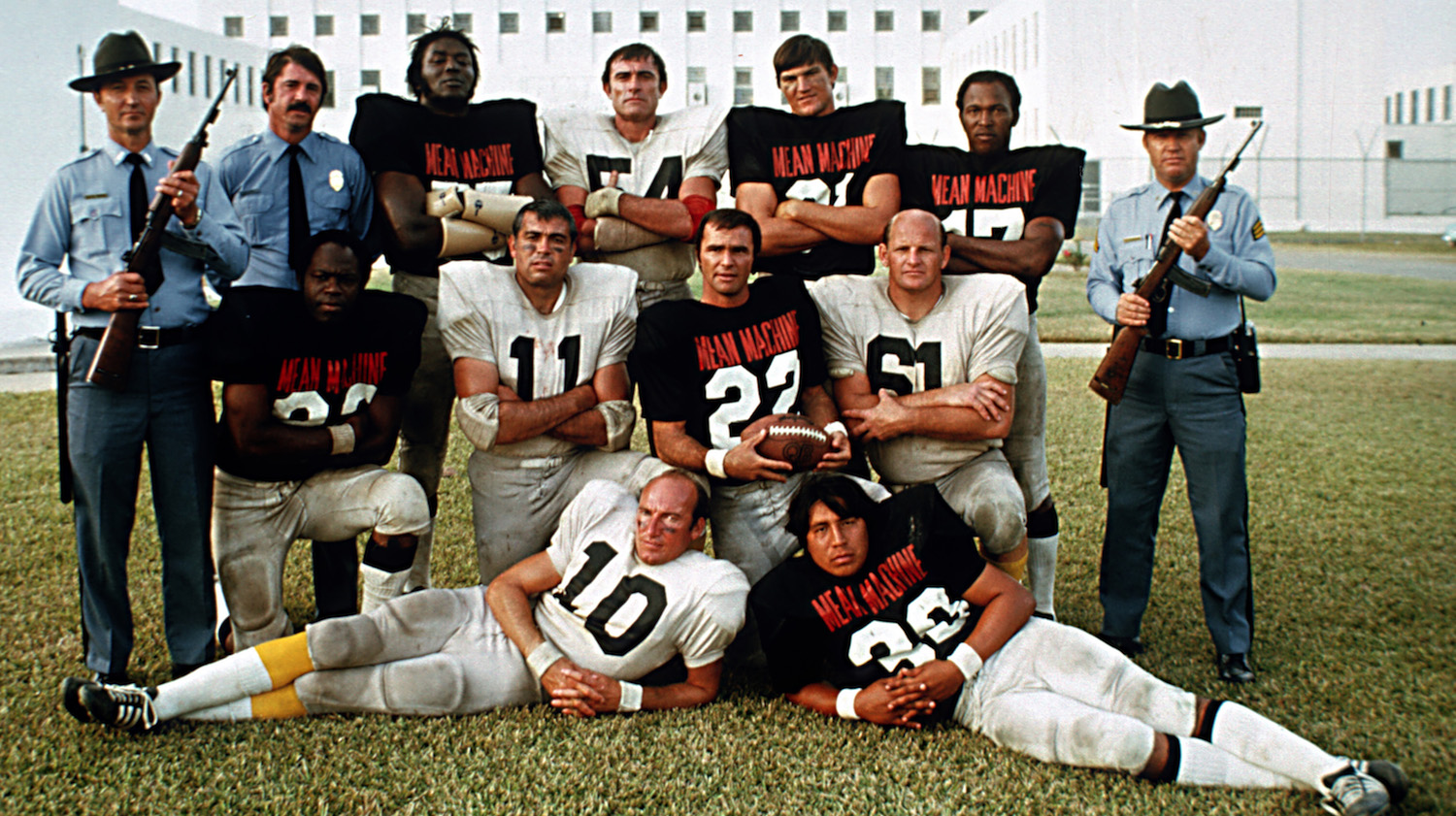 While it might generously be offered that Crewe’s despicable boudoir behavior is justified for the point it makes about the man’s ultimate redemption on the prison playing field, there’s also the patently unignorable fact that the scene’s supposed to played for laughs, and maybe even a whistle. And that’s because it’s Burt Reynolds playing Paul Crewe and not, say, James Caan, Gene Hackman, or even the similarly self-packaged Warren Beatty. When Reynolds blows off his meal ticket, only to trash the car and flick a cheroot in the drink after it, he’s laughing that impish laugh and flashing those knowingly up-to-no-good eyes. He’s being exactly the kind of hero we wanted and expected Burt Reynolds to be, and if he gets away with it – at least in terms of our affections for him – it’s because well, it’s just Burt being Burt.

Writing at the time of the movie’s wide release in October, 1974, the New Yorker‘s redoubtable Pauline Kael noted the emergence of a new kind of people’s movie star:

“He had been acting in theater and on television since the late fifties and had appeared in a dozen movies without creating much of a stir but when, in 1971, he began to appear on talk shows, other guests laughed nervously at hearing behind-the-scenes smart talk in public. But the TV audience enjoyed the dropping of barriers, and Reynolds was on his way.”

Like his primary period box office rival Clint Eastwood, Reynolds had ridden tirelessly but surely toward stardom from beginnings in TV westerns, but unlike Clint, whose transition from small to big screen was confirmed by his appearance in a trio of highly-stylized Italian-made cowboy movies, Burt never really shook the traces of TV stardom from his height-boosting Cuban heels. On the contrary, he flaunted it. For if there was one thing Burt could do that Clint never could, it was give great couch. On any talk show, but on Johnny Carson’s Tonight Show in particular, Reynolds was already at the top of his (and anyone else’s) game.

“He showed an amazingly fast put-down wit, but he also showed something else, which the TV public was probably ready for: he made a joke of his profession. He came on as a man who had no higher values than the buck and the pleasures of the flesh—exactly what people in the audience had always believed stardom was about.”

You might well wonder if Reynolds’ gum-smacking disregard of his own celebrity wasn’t either a), a particularly savvy form of self-referential performance; or b), a mildly cathartic anti-establishment stance that appealed to whatever remained of the scorched countercultural spirit Nixon had so effectively reduced to ashes. Either way, Reynolds’ splayed, winking insouciance on the big late-night couch of America – an attitude of cocky, laid-back machismo that made his coyly, not-quite-nude appearance in Cosmo two years previously such a must-have supermarket sensation, and which the opening of The Longest Yard so smartly evokes – was the already seasoned semi-star’s ticket to the pro league summit.

Before one considers the potential downsides of such an engagingly casual attitude towards one’s own celebrity – like a dubiously casual attitude toward the projects one appears in; a reluctance to try too hard at really acting; and a very quick burnout factor once people realize they’d just as soon watch Burt playing Burt at home on TV as go out and pay to watch same thing – let’s give the man his chops for prescience. The fact is, Burt Reynolds seemed to see the future of stardom in America: by the end of the decade which saw the former football hopeful and stuntman’s currency rise and fall almost as quickly as the credibility of Jimmy Carter, almost everybody in line for a crack at the big time had to learn to play Burt’s game as well. It became almost essential that one adopt a self-mocking shrug in the face of fame, and it was ultimately expected that rising Hollywood aspirants either make fun of themselves in public or risk that that same public might just take your stardom back. And the talk show, post-Burt, became the arena in which the sincerity of one’s insincerity was tested. Reynolds was one of the very few bankable movie stars on Carson’s show who did it regularly. By the time David Letterman arrived, it was required and expected. 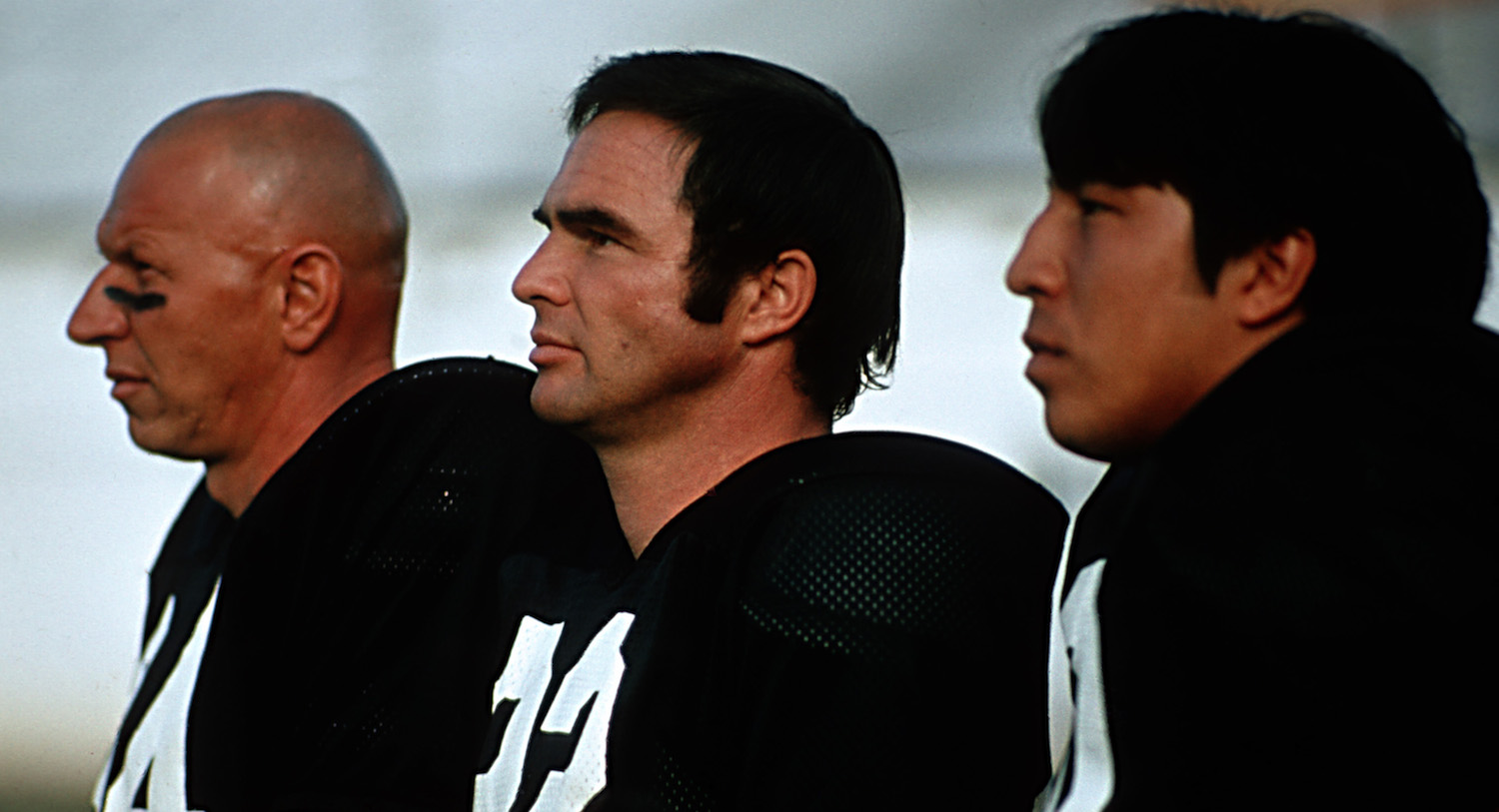 In retrospect, The Longest Yard isn’t just a very smart and crisply directed popcorn (and bone) cruncher of a movie – and which has enjoyed a considerable rise in reputation and esteem since it was first largely dismissed as jock hokum – it’s a remarkably astute deployment of the particular appeal and limitations of Burt Reynolds. Director Robert Aldrich, whose movie career stretched back to the forties and who specialized in producing mass-appeal entertainments – like Kiss Me Deadly, Whatever Happened to Baby Jane? and The Dirty Dozen – that themselves mocked America while playing the big Hollywood game – seemed so smartly attuned to his star’s new brand of celebrity the entire movie seems to retrospectively really be about the struggle of being Burt Reynolds.

From that first appearance in those tangled sheets to the big grin when the tables are turned on the guards and Crewe gets his dignity and groove back, Reynolds plays Reynolds as only Reynolds can, but in a movie in which he’s impersonating a guy who blew his career due to cynicism, and whose glib attitude toward his own fame – which is so mercilessly preyed upon by the cons – is what lands him in the slammer in the first place. In agreeing to the warden’s albeit non-negotiable offer to organize the cons into a credible football team, Crewe gets to both prove himself as a regular guy and as a leader of other men. A star, in other words.